Tonight my girls and I went to the theater for a second week in a row for Twilight Saga Tuesdays. This week was NEW MOON! 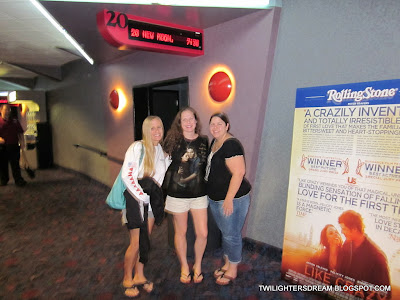 Just like last week they played extras before the movie started. Jackson Rathbone and Nikki Reed introduced and hosted the extras again like they did for Twilight.
Nikki introduced some clips from the New Moon Comic Con in San Diego as well as a behind the scenes look at their filming in Montepulciano Italy.
Jackson introduced the footage from the New Moon Premiere in LA which looked like so much fun. I would love to go to Breaking Dawn Premiere. I’m jealous of everyone who gets to go and look forward to seeing pictures from everyone who does.
Jackson also shared his favorite scene which was Bella’s Birthday Party where Bella got the paper cut. He said it was great because you got to finally see how dangerous it was for Bella to be around them. It was also fun to play because they got to let loose a little and show their vampire sides. Very fun!
Jackson ended the special extras by introducing the Breaking Dawn trailer, inviting us back next week for Eclipse and kicking off the 10 day countdown!! Yay!! Tomorrow we are in SINGLE DIGITS! I can't wait! :)

Posted by Twilighters Dream at 11:11 PM