Tonight was so much fun! It was full of giggles, goosebumps, sparkles and popcorn. My girls and I went to the theater to see Twilight tonight for the first of three Twilight Saga Tuesdays. 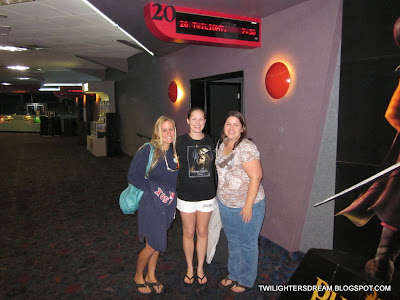 Before meeting up with the girls I went home to change into my Twilight t-shirt and SPARKLE up! A true Twilighter can't go to the movies without adding a little sparkle first right? haha
I was so excited to see Twilight on the big screen because this was only my second time. I have to say as many times as I've seen it seeing a giant Edward is so much better than the Edward on my TV at home. :)
I think Summit did a great job putting something special together for us. Of course I wanted more and to see more but us Twilighters can never get enough. We want it all! All the behind the scenes, special features, interviews, etc that we can get.
The show started with Jackson Rathbone (Jasper) welcoming us all to "Twilight Saga Tuesdays". Nikki Reed (Rosalie) was also there to welcome us. Both of them introduced a special segment. They showed clips from the first Comic Con, the Twilight Worldwide Movie Premiere and an extended scene of Robert playing the piano.
Jackson and Nikki also shared with us their favorite scene from the movie. Julia Jones (Leah) and Boo Boo Stewart (Seth) also made an appearance to share their favorite scene. Jackson was so funny when he introduced Boo Boo. He said....'He has the best name "Boo Boo"' and laughed in his adorable southern voice.
At the end of the feature Jackson said "I'll see you all next week on November 8th for New Moon." I will totally be there and can't wait to see more of the special stuff they have before the movie.
Jackson parted with introducing the trailer for Breaking Dawn. Yay! I was super excited because this was the first time I've seen the trailer on the big screen. :) LOVE IT!
Oh by the way you don't have to stay until the end of the credits to see if there is anything more. We totally did hoping there was and there wasn't. Although we did get to enjoy the music during the credits.
I can't wait for next week for New Moon Tuesday.
Check out Facebook for pictures from Twilight Saga Tuesdays.
Posted by Twilighters Dream at 12:59 AM