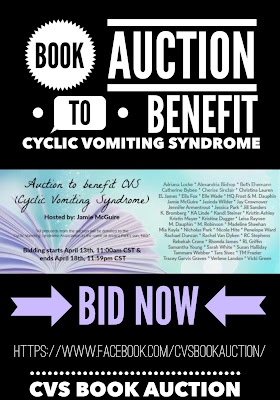 One of the biggest book bundles up for auction is an autographed copy of GREY and a Fifty Shades Darker MOVIE POSTER signed by E L James, Dakota Johnson AND Jamie Dornan!!!  HOLY MOLY!!!  That's some lot! 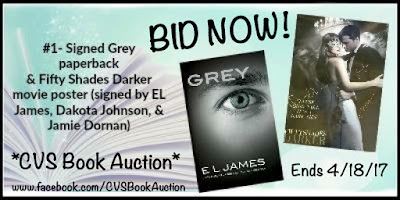 
As if that wasn't enough what about an autographed copy of Sweet Nothing by Jamie McGuire.  This is a widely sought after, elusive unicorn you won't find anywhere because it is OUT OF PRINT.  And guess what.... there is one up for auction!!  Say what?! Yep, you heard me.  Now is your chance to get your hands on a copy. 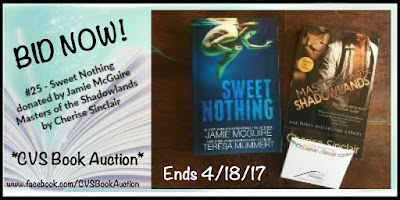 
Are any of you Twilight fans?!  *Giggle*  As if I have to ask!  Well guess what... there is a Twilight bundle just for you!  Lot #49 is my favorite and includes something every Twilighter would love to have on their book shelf.  This lot includes TWO paperback copies BOTH signed by Stephenie Meyer.  One is the US edition of Twilight and the second is a Foreign "Chinese" Edition of Breaking Dawn!  How cool would it be to have a signed foreign edition for your collection!!! Eep!!! 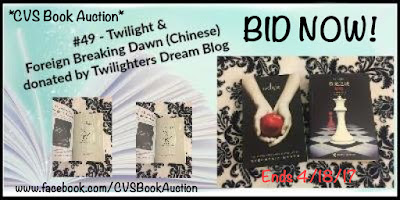 Are you excited yet?!  Are you still with me or have you already clicked on the links above to check it out?!?  LOL I don't blame you if you have.  I know I would of.  If you are still with me I haven't even told you the best part yet.  EVERY SINGLE DOLLAR from this auction is going to charity!!!  Yes, every single dollar! 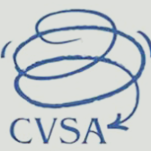 Please take a few moments to read this write up from Jessica about CVS.... 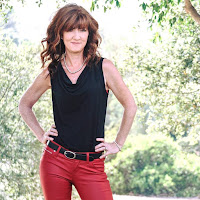 Cyclic Vomiting Syndrome. Yeah, it’s about as glamorous as it sounds. We’ve all had a stomach bug or food poisoning or such, and if you think living through either of those was awful, try living with CVS.
Here’s the quick run down: Bouts of essentially unexplained, horrific, and unstoppable vomiting, often at the same time of day, that can last hours and hours with no real explanation. Vomiting that you cannot stop. Vomiting that is unlike any vomiting you’ve lived though, because the relentless and traumatic nature of a CVS episode is mind-blowing. Severe dehydration, major stomach pain, and days of misery even after the vomiting has subsided. This illness takes down children, teens, and adults. No clear cause, no set course of treatment.

"I’ve lost my physical abilities, the ability to raise my kids, and my career. I'm mostly bed-bound. The pain is unbearable. I don't want to die, but I don't want to live like this either." –Desiree M.

“Our daughter was diagnosed with Cyclical Vomiting Syndrome almost exactly one year ago. She was 5 then. She would wake up in the middle of the night, several nights a month, puking and writhing with stomach pain. Exhausted. Confused. And in pain. And in the morning she would be completely fine. These patterns would continue for several nights in a row, a couple of times a month. With no warnings and no obvious triggers. She was scared. And we were terrified...We've spent many hours doing our own research (often in the middle of the night while we watched over her) about triggers for episodes and doing a lot of trial and error.”-Megan H.K.

If you’re puke-phobic and still here, I thank you. I know reading about this isn’t fun in the least, but this syndrome needs our attention.

I’ve watched my teenage son, Nick, vomit every two or three minutes for four hours at a time, throwing up bile and drinking fluids just to have something to throw up. I have never seen such violent, relentless, terrifying vomiting. My kid is six-feet-tall, and the onset of an attack will drop him to the floor in seconds, leaving him unable to move, except for his body involuntarily heaving everything—and then nothing--out of him. It is beyond traumatizing to watch a loved one suffer like this, so I can only imagine the nightmare of actually being in an episode. Or what it’s like for those who live with CVS for years and years without diagnosis or without successful preventative treatments or ways to abort these horrific episodes.

I can see now that there were early signs of this syndrome creeping up, but it took an urgent care visit and two ER visits for us to get resolution. We were very lucky to have a wonderful emergency room near us, and they referred us to an even more wonderful GI, who diagnosed Nick almost immediately. Still, it’s taken months and months to get this under control. That being said, the trauma we’ve gone through wakes me up most mornings with flashbacks of episodes, and I am trying to learn what it means to relax again. We now have what seems to be a successful cocktail of preventative medications and supplements, and we have easily stopped the few episodes that have started since we found the efficacious combination of medications.

It’s not clear what causes Cyclic Vomiting Syndrome. It’s possibly a mitochondrial issue, and although this is not well understood, most people take a “mito cocktail.” Cyclic Vomiting Syndrome is also referred to as “abdominal migraines,” and some CVSers experience migraines, as well as these severe stomach episodes. Migraine meds can help, but certainly not always. It’s also possibly a neurological issue in which the nervous system has a hard time processing input. This means that heightened states that most of us can process well (even normal excitement/joy or normal stress) throw the nervous system into overload. My son has had episodes triggered by looking forward to attending Comic Con and from watching a super-awesome Spider-Man: Homecoming trailer. His entire system got overloaded just from having appropriate feelings. He felt happy. He felt excited. And his system tossed him into utter distress. I’ve heard that doctors’ offices are overloaded during Christmas season, because, you know, SANTA IS COMING! How heartbreaking is it that a child’s holiday joy can trigger days of pain? And it’s not just kids. Many adults suffer terribly with CVS. Something stressful going on at work? Anticipating travel? Thinking about moving? Almost anything can be a trigger, even the most minor of stressors.

So while anxiety is not the cause of CVS, there does become a narrative one can’t escape. I mean, if you know that particular events might throw your nervous system into a horrible, painful, nightmare vomiting cycle, wouldn’t you get a tad concerned about feeling anything? Doing anything? Yup. But CVS destroys the ability to express emotion because it teaches you to be afraid of life.

This illness has the power to wreck nearly everything. Holding down a job can be impossible. Parents may be struck down for weeks by this syndrome and left unable to care for their children. CVSers miss birthdays, holidays, weddings, simple dinners with friends. They miss out on daily life and daily interactions with those they love. Friends and family may doubt the illness, claiming it’s an anxiety disorder or that the CVSer is just stressed and being dramatic.

We’ve all been stressed.

We all don’t all vomit for days until we want to die.

Until we literally don’t know if we can live through the upcoming hours.

That is truly how bad CVS can be. On day three of an eight-day episode—pre-diagnosis—he said, “I can’t do this. I don’t want to live like this. I just want to die.”

You can imagine my heartbreak. You can imagine the heartbreak when someone in a more severe CVS situation lives for years and years in a state of draining, exhausting, painful deterioration.

People with Cyclic Vomiting Syndrome are warriors. Because there is always a monster to battle. Always a monster waiting to wreck anything and everything. But even when feeling frustrated, hopeless, and beaten down, these warriors are some of the toughest people you’ll ever know. The strength it takes to battle this monster is formidable.

There are doctors who are absolutely wonderful, supportive, and hell-bent on helping their patients. However, based on what I’ve learned from Cyclic Vomiting Support groups in which I take part, I’ve been routinely shocked to hear how many doctors know absolutely nothing about this illness. People who are chronically ill with CVS are often treated horribly by doctors in primary care practices and in emergency rooms, and they’re routinely accused of drug seeking or suffering from bulimia. They are sent for psych evals. Psych evals! Warriors are told that they are depressed, that they have some kind of crazy IBS, or that they need diet changes.

Their illness is negated, and they are shamed.

So little is known about CVS, so little understood about its cause or its treatment. These warriors need our help. We must do what we can to support research and spread the word about this nightmare syndrome. Let’s find out what causes CVS, figure out better, more effective treatments, and let’s educate doctors about the condition so that warriors are supported and cared for intelligently and kindly when they seek help.

Thank you so much for taking the time to read this. I’m continually astounded by the generosity of the author and reader communities, and I am so grateful for the generous donations the support I’ve received from countless people as I’ve learned what it means to care for someone with CVS. Every dollar from this fundraiser will go directly to the Cyclic Vomiting Syndrome Association for research and education. Let’s bid like crazy and help improve lives!

I sincerely thank you for taking the time to read this blog.  I hope you will head over to CVS Book Auction on Facebook to see all the awesome bundles up for bid.  Even if you don't bid please SHARE it to help bring awareness. Thank you so much!


CHECK IT OUT AND BID ON SOME GREAT ITEMS AND DONATE TO A GREAT CAUSE!!

Posted by Twilighters Dream at 11:36 PM No comments: