When hosting a Twilight Party you want to serve food and drinks that relate to the Twilight Saga or the characters in some way. Well that's what I did anyway . . .

A lot of the ideas I came up with simply by going to the store and seeing what was twi-like out there and brainstorming what do the characters like. Well not the Cullens because they don't eat or drink. LOL

Other ideas I can't take credit for the recipes because I found them online during my research. There are so many out there that have hosted great parties and it's great to see what they've done. Use their ideas and tweak them to work for you .I don't remember all the websites that I got them from so sorry but I did say they weren't all mine. :)

The following is the menu with recipes from my Twilight Party I threw last year. 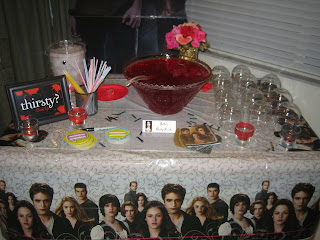 
Bella’s Bloody Punch (Non-alcoholic)  - Recipe provided
Edward’s Vampire Wine
Bella’s Red Truck Wine
Jacob’s Creek Wine
Vampire Venom Jell-o Shots - Recipe provided
For the drinks I went to the Total Wine store in my area and walked up and down every aisle getting ideas of twi-like wines. You can only imagine how many there really are out there. I decided to get 3 different kinds one that represented each of the main characters - Edward, Bella & Jacob. 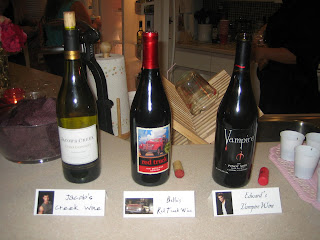 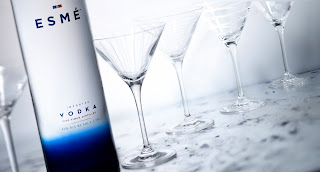 Bring water to a boil and remove from heat. Dissolve the Jello in boiling water, stirring at least 2 minutes until gelatin is dissolved. Add cold water and Esme Vodka. Pour the mixture into shot glasses or paper cups. Let sit in refrigerator for at least 4 hours.
Repeat the steps again with second flavor Jello and color for the red and black layered effect. 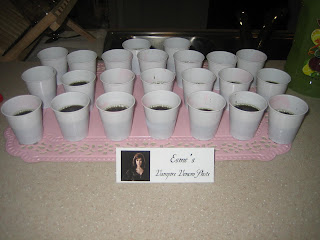 At the beginning of the party and throughout I had appetizers for my friends to munch on. I put out a platter with cut up apples and cheese which was Edward's Forbidden Fruit and Cheese. I used the bags of pre-sliced apples and sunburst cheese cut outs because I'm all about the quick and easy way. 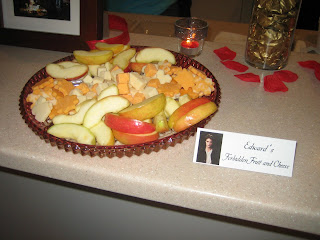 I also put out a bowl of Chips and Salsa (who doesn't love that) and called it's Victoria's Chips and Salsa. I used the blue tortilla chips because they look black and combine that with red salsa you have a Red & Black appetizer which went along with the theme. 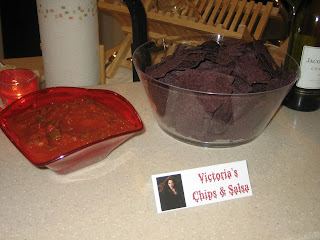 Another fun appetizer we had were Bella Bites which were parmesan and bacon stuffed tomatoes. Those were delicious. They were kinda tedious to make since you have to scoop out all the seeds from the tomatoes but well worth all the work. I recommend making them the night party before your party and putting them in the refrigerator. Here is the recipe for those. 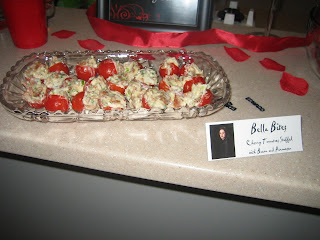 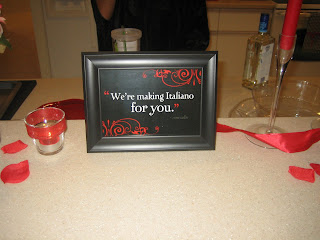 For the main course I did the easy thing - I ordered out Italiano. I know the party was an excuse to use the kitchen but I wanted to be able to relax and have some vampish fun without worrying about cooking.
There is this delicious place just around the corner from my house believe it or not in the Bella Villa Shops called Two Meatballs in the Kitchen. It's a family owned restaurant by true Italian and they make the best food.

I ordered a double order of their Mushroom Ravioli which is to die for and Bella's favorite that she ordered on her first date with Edward. I also got garlic knots because who doesn't love those and garlic doesn't effect these vampires because that's just a myth outside of the Twilight world.

I wasn't sure if everyone would like the Mushroom Ravioli (everyone did but I planned just incase) so I ordered some delicious pizzas. Remember Edward took a bite of Bella's pizza one day when they sat together in the lunchroom. :) I ordered two kinds one for our meat loving Volturi vampires and for our beloved Cullens I ordered vegetarian cheese pizza! LOL
I made cute place cards for each dish served for dinner but can you believe I was too hungry to think about taking a picture so sadly I don't have any of the actual dinner. :(
DESSERTS
Charlie’s Mixed Berry Cobbler - Recipe provided
“Choose Your Team” Red Velvet Cupcake
On top of all the food that we had I still served dessert! Charlie's favorite dessert that he has at the diner every Thursday is Berry Cobbler so what party wouldn't be complete with berries on top. Here is the recipe. We served it warm with Cool Whip. 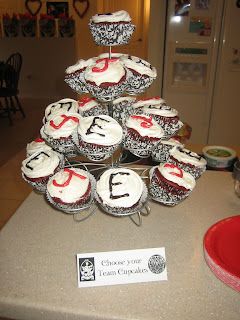 Another fun dessert that I served was one of my favorites! Choose Your Team Cupcakes! They were so cute, fun and easy to make.
All you have to do is get a box of Red Velvet Cake Mix and make according to the package instructions. I found these awesome black and white baking cups at Michael's Arts and Craft so I used them because they were very Twi!
After the cupcakes cooled, I spread white cream cheese icing on top and decorated them with "E"s and "J"s for Edward and Jacob. I used Black Sparkly icing gel to write the "E"s and Red icing to write the "J"s on top of each cupcake. Place the cupcakes in a cupcake tree and you have a cute and fun dessert.
Menu Notes
There are so many great ideas of drinks, appetizers and desserts out there. These are just some of the ones that I did.


Did you miss the first blogs about the Twilight Party? Check them out here!

Follow along with me and stay tuned
for more Twilight Party ideas.
Next blog will be about the decorations!
Posted by Twilighters Dream at 1:54 PM